David Kyle’s number one goal as director of the Ability Sport Network is to help people with disabilities to be more physically active.

“That is the absolute main goal of the program,” he says. “People with disabilities just don’t get enough exercise.”

A seven-time world champion in Paratriathlon, Paraduathlon, and Xterra and a 14-time national champion, Kyle’s own experience with disability helps guide his vision, one that UNC Greensboro’s online Doctor of Education in Kinesiology (EdD in KIN) helped make possible.

Diagnosed with multiple sclerosis more than 15 years ago, Kyle turned to exercise and competing as a triathlete to maintain his health. While not everyone needs to be a world champion, they do need activity to live a higher quality of life and to fight things like heart disease or comorbidities that may be present because of a disability.

Skills he was learning in the EdD program aligned perfectly with what he was doing professionally — from online pedagogy and grant proposals to collaborative learning, curriculum development, and program design. He completed EdD course assignments to write policy and procedure manuals for UAH. During the recent regional accreditation process for the UAH kinesiology department, Kyle was well prepared to make recommended adjustments because of his familiarity with accreditation requirements and experiences he had as part of the degree program. 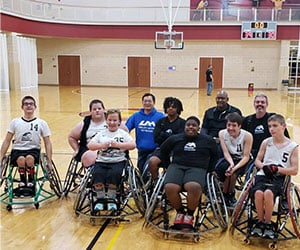 During his first semester as an EdD student, Kyle received a grant to start the Ability Sport Network at UAH. He developed the network alongside course assignments in the EdD program. He had quit competing in triathlons but wanted to stay involved with athletes with disabilities in a more administrative role.

“I had such a great experience from Paratriathlon and having a disability, I just kind of wanted to share that,” Kyle says. “Being competitive keeps you motivated to participate.”

Going into its fifth year, Ability Sport Network provides sport activities to middle and high school students with disabilities, as well as a learning experience for kinesiology students at UAH who volunteer with the program.

“Really, it’s giving them the opportunity to experience adapted sport and then meet people with disabilities,” he says.

The Ability Sport Network offers adapted sports like wheelchair basketball, a junior varsity team that has gone to the national championship for the last three years. There are 47 teams nationwide, a number Kyle says needs to be higher.

Kyle’s dissertation looked at the need for more adapted sports programming. “You don’t participate if there’s no program,” he says. “In my mind, you’re missing hundreds of thousands of people being more active because there’s just not enough programs.”

Kyle says every mid-size city needs a program similar to the Ability Sport Network. There are only a few in Alabama. One family drives two hours from Mississippi every week for his practice because UAH is the closest team.

The program not only keeps participants active, it also connects them to others like themselves.

“That’s been good for them because they see people from all over the country similar to them with disabilities, so it kind of creates a little bit bigger world for them and opens up this concept of ‘I’m not alone,’” he says.

Ally Bosheers has seen Kyle’s passion for the program firsthand. As an undergraduate student, she took several classes from Kyle while he was earning his EdD, including adapted sports. She interned with ASN and has remained active with the program as a volunteer and now as the assistant coach. She says he reached wider areas in his efforts to expand the program, adding more players to the wheelchair basketball team, and taught her new ways to help in the community.

“He cares about each player and their parents, and I believe that the challenges and rewards that come with his position have helped him become one of the best instructors on UAH’s campus,” she says.

Kyle is also advocating to start collegiate adapted sports and put recruitment efforts into students with disabilities. “Adapted sports are one way that makes our school more attractive, more accessible,” he says.

The EdD degree gives him credibility when making the push, as well as for other things he’s interested in, like active classrooms and advocating for more active spaces on campus.

In his own classroom, Kyle follows evidence-based best practices to create an active learning environment similar to his experience as a student. “You’re having the student be a little more in charge of their learning,” he says. “You’re not just telling them content. They’re discovering it in other ways.”

Being an online student allowed Kyle to see what is possible, giving him skills for better instruction. “I learned the wrong way to teach online — hours and hours of video lecture,” he says. “It just bored people to death. Learning the right way, you’ve got that professional ammunition — here’s best practices, here’s the evidence.”

The EdD program’s online cohort model worked well for Kyle. The sense of community fostered by the program is strong, and he built relationships through his online classes. “I’ve got lifelong friends even though we’ve only actually physically met a few times,” he says.

Married with three kids and 10 acres of grass to cut, the online format allowed him time for family. And he took the flexibility of online learning to heart, not missing out on family camping trips. “Everybody’s asleep and I’m up typing up my kinesiology stuff,” he says.

UNCG’s interdisciplinary online Doctor of Education in Kinesiology program is for practicing professionals with three or more years of experience in kinesiology or related fields, focusing on scholarship and professional practice in leadership, advocacy, and teaching. Download a brochure.