After working in a nursing home and seeing the challenges firsthand, Melissa found a graduate program that would help her make a difference.

Even as a child, she would go out of her way to spend time with older relatives and neighbors. So when Melissa and her daughters took a Certified Nursing Assistant (CNA) training program to work in a nursing home, she was shocked to see disparities and neglect among the residents.

“That whole experience triggered a lot of things in me personally when I saw the environment that a lot of those individuals were in,” she says. “That probably was the engine that drove me — not even knowing it — to pursue this program.”

An Interest Becomes a Calling
After dropping out of college at 18 to raise a family, Melissa decided to continue her education. She earned an associate degree and transferred to UNC Greensboro to earn a bachelor’s in Public Health Education. When UNCG launched an online Gerontology program, it sounded like a good fit. She started the graduate program in January 2019.

Melissa found her Gerontology courses fascinating. “I loved learning the different frameworks, the theories, and learning research skills, and just the inclusive cultural dynamics,” she says.

Courses that Make Vital Connections
Her favorite part was learning about the science in courses such as Cognitive Aging, taught by Dr. Thomas Farrer. (When he’s not teaching in the Gerontology program, Dr. Farrer is an Assistant Professor in Psychiatry and Behavioral Sciences at Duke University.) Melissa says the course allowed her to make connections with what she’d seen as a CNA with conditions such as Alzheimer’s disease.

“He gave us the science behind, the why, the anatomy, the physiology, and the brain structure, and why the pathology created what I saw on the surface, so it just made a lot of connections as a science buff.”

This knowledge helped Melissa see these patients in a new light, and she wondered how different things might be for nursing home residents if CNAs could make these connections.

Using Research to Improve Patient Care
Melissa says the program deepened her research skills, as she learned how to extract quality research material and analyze it. This was critical for her capstone project, when she had to synthesize about 100 articles into one research paper.

For her project, Melissa focused on how to reduce elderly abuse and neglect in nursing home environments. She researched facilities around the world to examine how they incorporate worksite health promotion programs. As a former CNA, Melissa was well aware of the lack of training in this area.

“You come in with a certification and then you are thrown into the mix, and you’re told, this is what we need to do, and you’ve got to figure it out,” she says.

As part of her literary review, she proposed integrating training for CNAs with a gerontologic theory or framework built into it, to help them learn what to expect from patients based on their backgrounds. Knowing more about Alzheimer’s disease, for example, would help prepare staff for how their patients may react.

Melissa’s capstone mentor, Dr. Michael Perko, suggested she consider becoming a nursing home consultant. This would help her make improvements on a larger scale by developing intervention strategies for facilities, so she’s working on what that would look like. “I really do want to see something change there,” she says.

Hard Work, Big Results
Although this was not her first online program, it was the most rigorous. Melissa describes the courses she took from Dr. Elise Freeman as “no-play courses,” full of heavy material.

“They were tough, but you knew that you were going to get every ounce of gerontologic education that you could out of that course,” Melissa says. “I needed that. I needed that challenge. I wanted that rigor.”

At the same time, Melissa says Dr. Freeman was very encouraging, particularly at the start of the pandemic last spring.

“Elise sent emails of encouragement, let us know she had our back. We had her support,” Melissa says. “She was a very important figure in keeping us encouraged.”

Find Your Way Here
Want to learn more about the online MS in Gerontology program? Just fill out the form to download a free brochure.

Building Skills To Help A Population In Need

END_OF_DOCUMENT_TOKEN_TO_BE_REPLACED 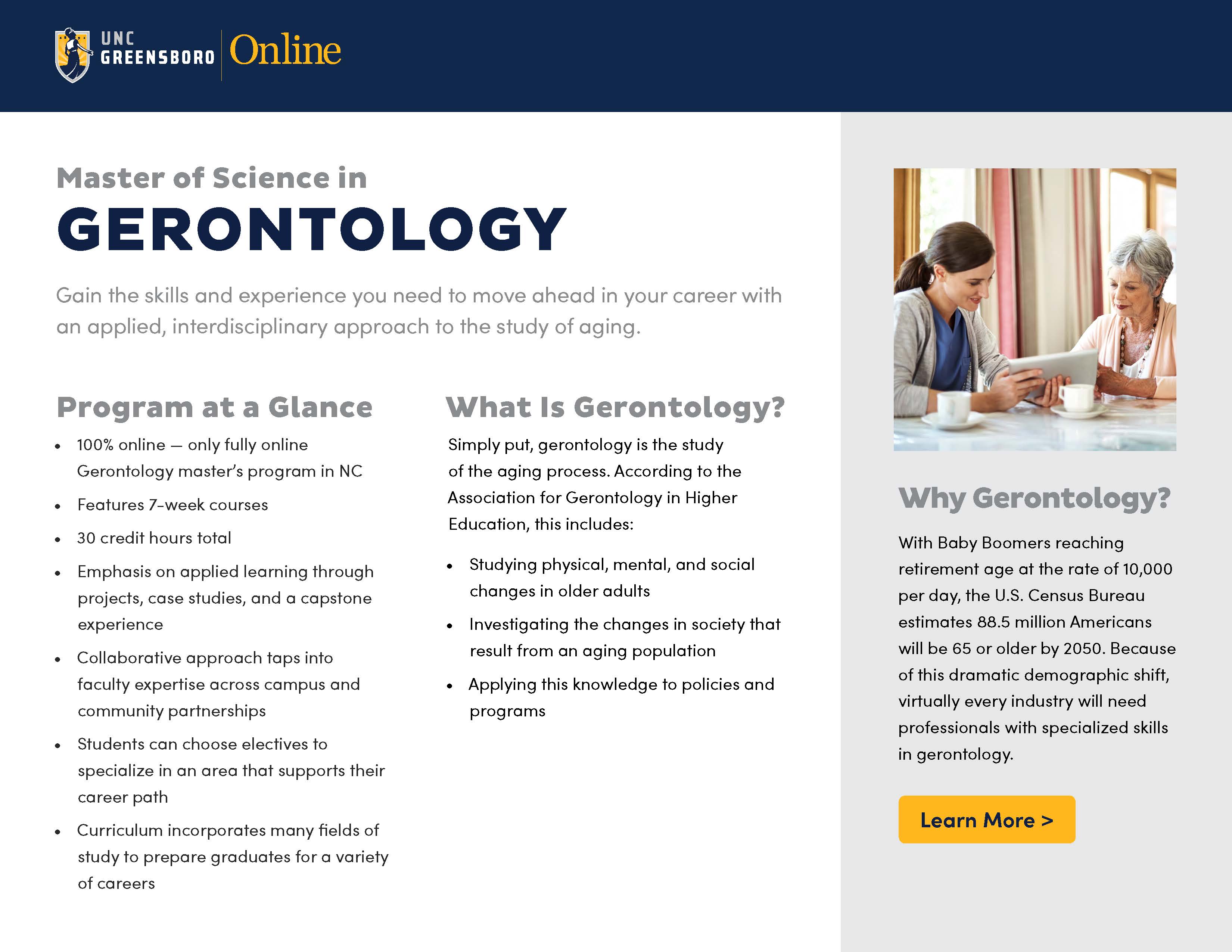