In MUS 329, students will consider rock music's connection to historical, political and social contexts. "Music will be the lens through which we'll try to understand broader historical and political events...such as the Civil Rights and anti-war movements, and the terrorist attacks of September 11, 2001," Rubinoff says.

Students learn about iconic artists such as Elvis Presley, Muddy Waters, Janis Joplin, David Bowie, and Metallica whose compositions and performances shaped rock music. Students explore the stylistic changes from rock 'n roll's origins in the '50s, to the '60s experiments with psychedelia, to '70s soft rock and heavy metal, the glamorous superstars and the rise of rap music in the '80s, the "alternative" sounds of the '90s, to recent developments such as R&B-inflected rock, teen pop and American Idol.

Students explore technological innovations, such as synthesizers, multi-track tape recording and digitization. "Moreover, changes in the record industry will also be an important focus, which will be of interest to students majoring in marketing, advertising and other related fields," Rubinoff says.

And about working with DCL? "I'm grateful for DCL's staff, who have worked closely with me over the past few months to develop a fun and functional interface for the class," Rubinoff says. The design reflects a stylized jukebox, and students navigate decades of rock history from the 1950s through the present. Students can even drop in a virtual quarter to play a few tunes. 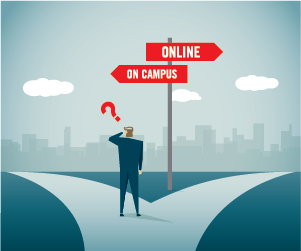