Olivia Built Skills to Help a Population in Need 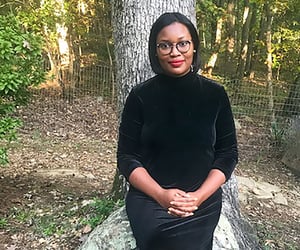 Olivia Cornett is passionate about improving the health of the aging population, which she says has been largely ignored.

After shadowing an internal medicine doctor one summer, Olivia discovered that she enjoyed working with older adults. When the doctor said he wasn’t sure the medical force is ready for the older population to outpace the younger generation, she found it heartbreaking.

“Studies are showing they’re living longer, so what are we going to do about it?” she says. “We want them to live longer and healthier lives. We want them to age well.”

Armed with two bachelor’s degrees — one from UNC Greensboro in Social Sciences and another from Salem College in Chemistry — she thought the MS in Gerontology would be a good next step in building a career that helps the aging.

Applying to the master’s program was an easy decision for Olivia. She thought it would be fun to go through the program with her mother, who was also applying, and she had fond memories of earning her first bachelor’s from UNCG.

“It was a very supportive environment to learn and to grow and develop in . . . my thoughts were, if I’m going to pursue a graduate program, I want to make sure that the support system is there,” she says. “That was a huge part of coming back home, as I like to say.”

Applying Theory to the Real World

It's not easy for Olivia to pick a favorite Gerontology course, but Theoretical Foundations of Aging taught her some key skills.

“I heard about theory here and there and everywhere, but I never knew how to apply it,” she says. “This really showed me how you can take a theory and you use it as the basis for a research question, which is what I did for my capstone, and that was very helpful. I saw just how useful theory can be.”

Looking back, Olivia says she appreciated the level of independence she had in formulating her own ideas and perspectives in gerontology.

“It’s so different from undergraduate, where everyone is telling you what you should learn. Then in graduate school it’s about what you’re taking from what you’re learning and applying it to real-world situations,” she says.

Faculty Feedback that Made a Difference

Olivia also enjoyed the Cognitive Aging course. She said the feedback she received from Dr. Thomas Farrer was as valuable as a lecture.

“He’d give us audio feedback, and I learned so much and gained so much perspective on cognitive aging, and it was from a professional,” she says. “It was really great to get that kind of feedback from him, and he was very supportive.”

For her capstone project, Olivia researched whether low birth weight or premature birth is a risk factor for dementia. She conducted a systematic literature review, and Dr. Elise Freeman was her mentor.

“I really loved hearing from her each week because I learned something new,” she says.

Olivia says the program developed her research and critical-thinking skills, and even though the courses were online, there was ample opportunity to build collaboration skills, too.

“I think that one of the biggest parts of professional development is just learning how to work with people,” Olivia says.

She adds that people often underestimate the amount of work required in an online course.

“The difference is, in a face-to-face class, you go into a lecture, you sit down, and you attend maybe three times a week and that’s your three hours. But in an online program, you have to put in some work to prove that you’re really learning the material and putting in the hours that you should,” she says.

The COVID-19 pandemic hit the United States during Olivia’s final semester in the program. She says we need to rethink policies and how we care for this population.

“The pandemic revealed some gross disparities,” she says. “Now, it’s a reality that we have to face. We have to prioritize their health.”

Olivia wants to help with that effort by continuing her studies in medical school. She plans to pursue a career in family medicine with a subspecialty in geriatrics. Her ultimate goal is to incorporate healthy aging throughout the lives of her patients.

Learn more about the online MS in Gerontology program.